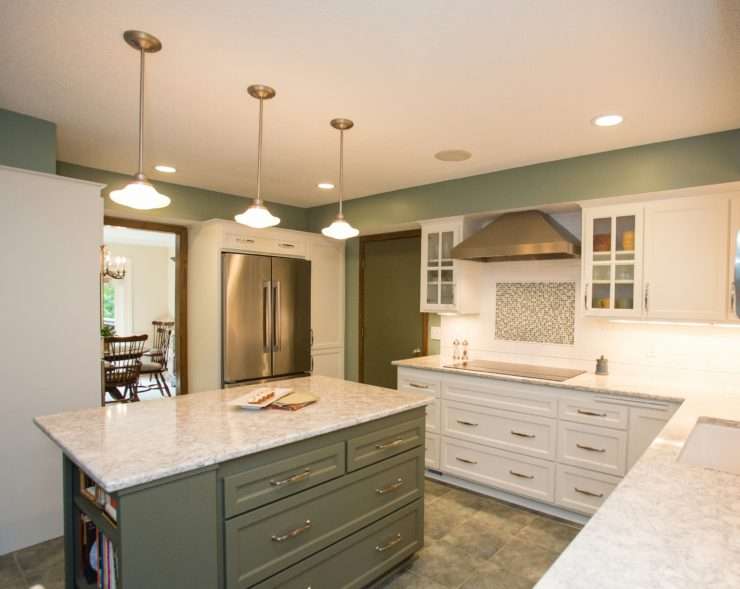 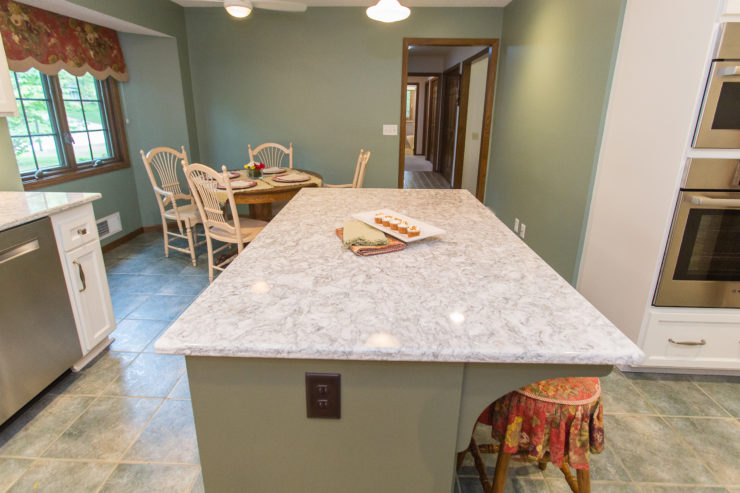 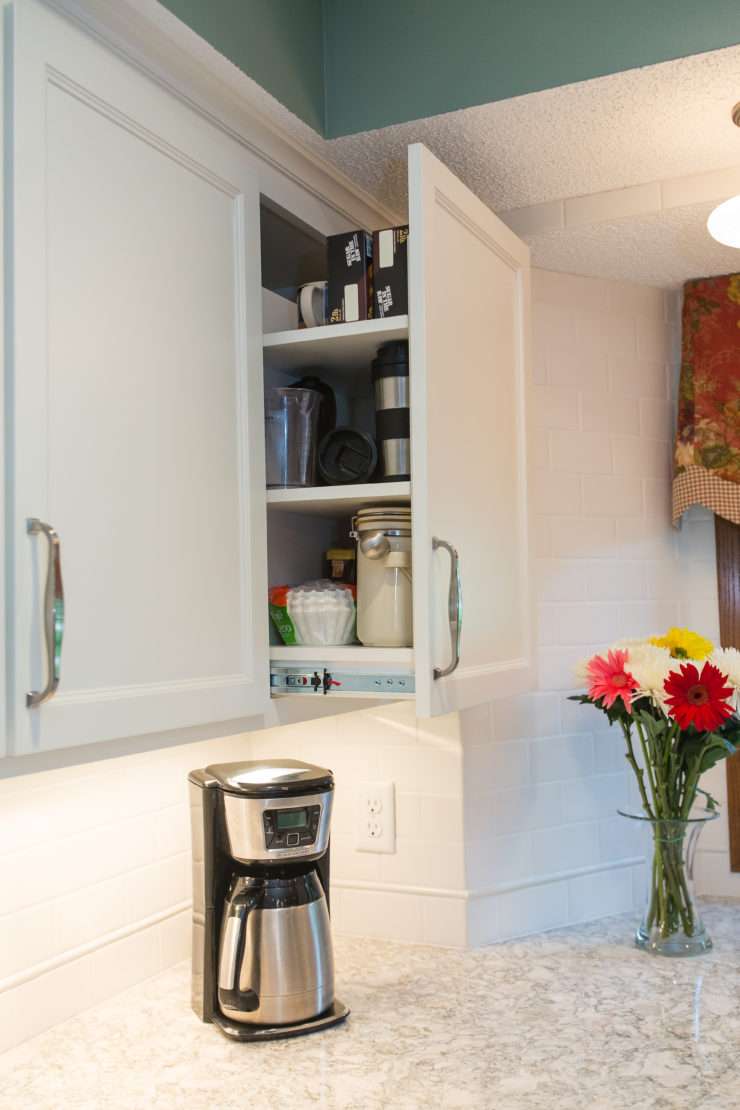 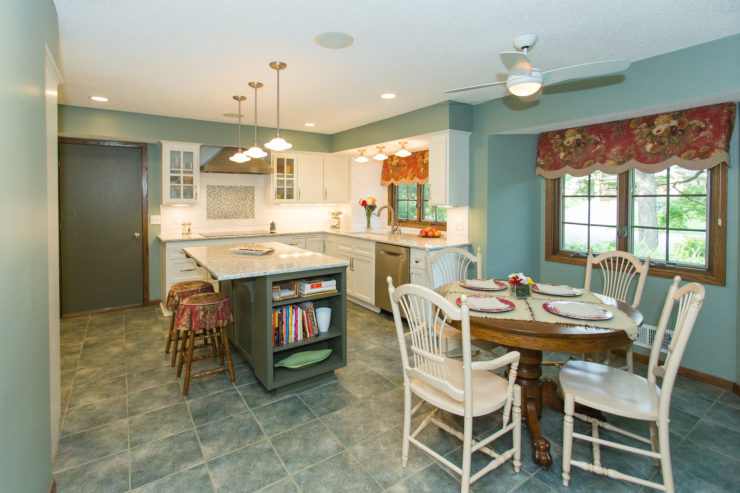 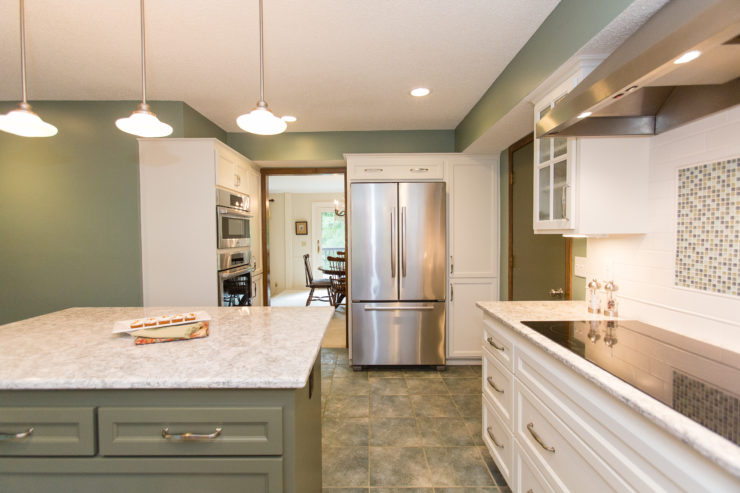 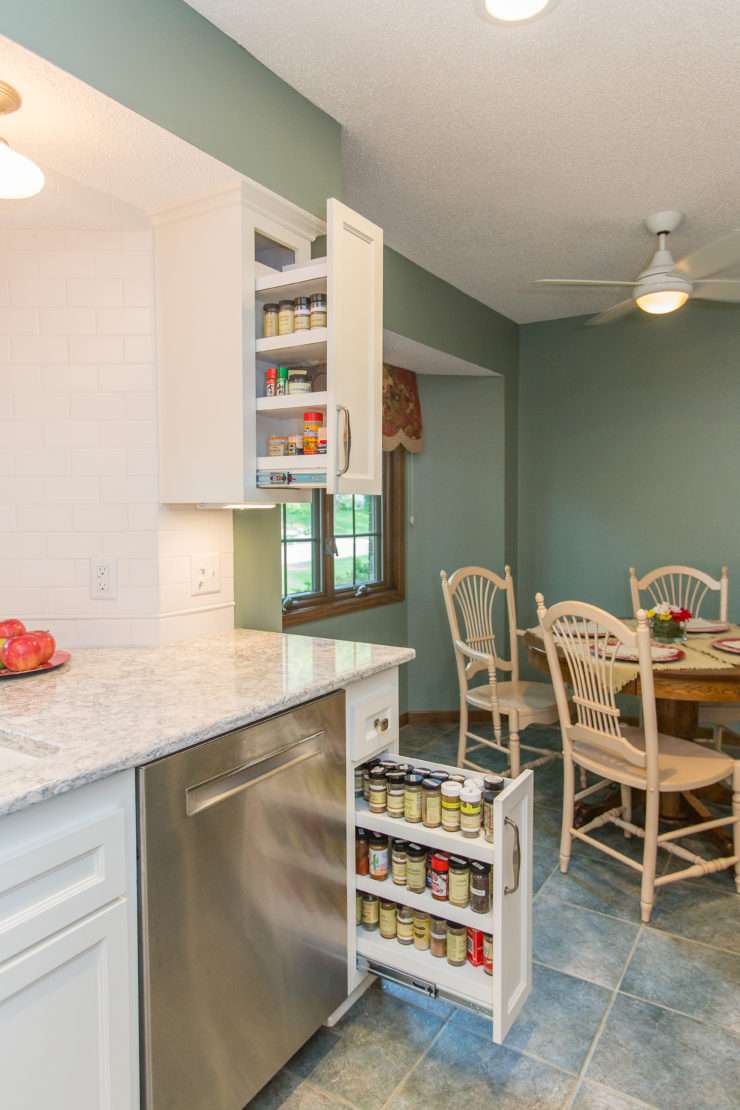 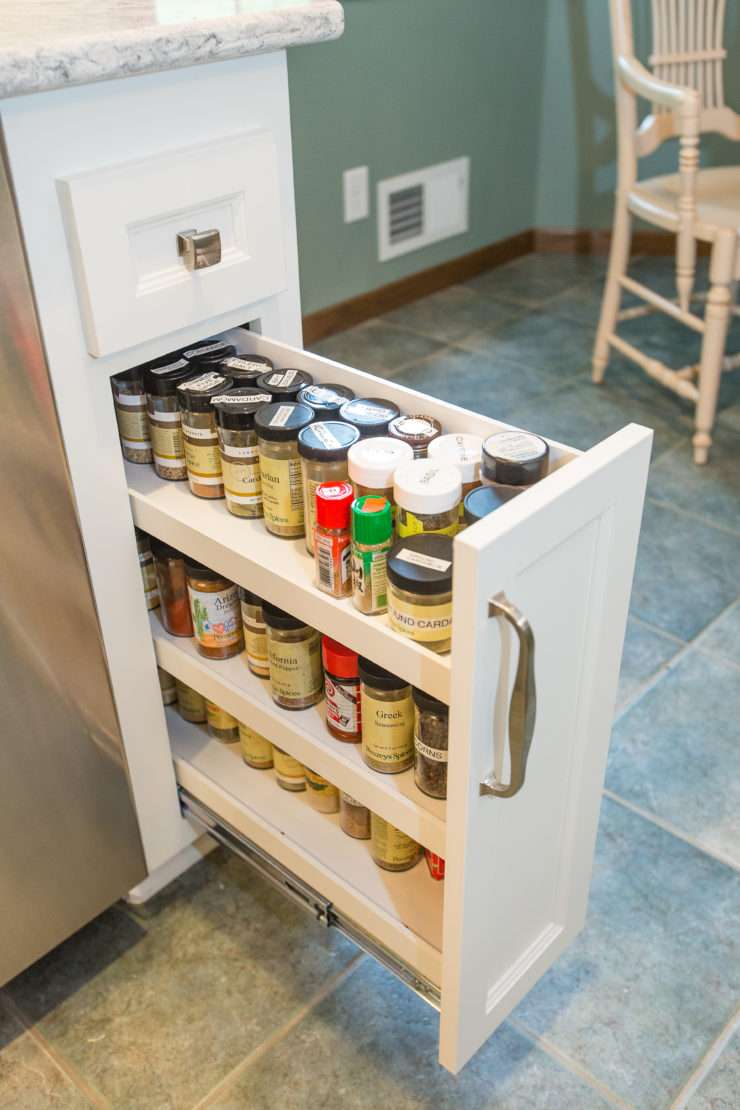 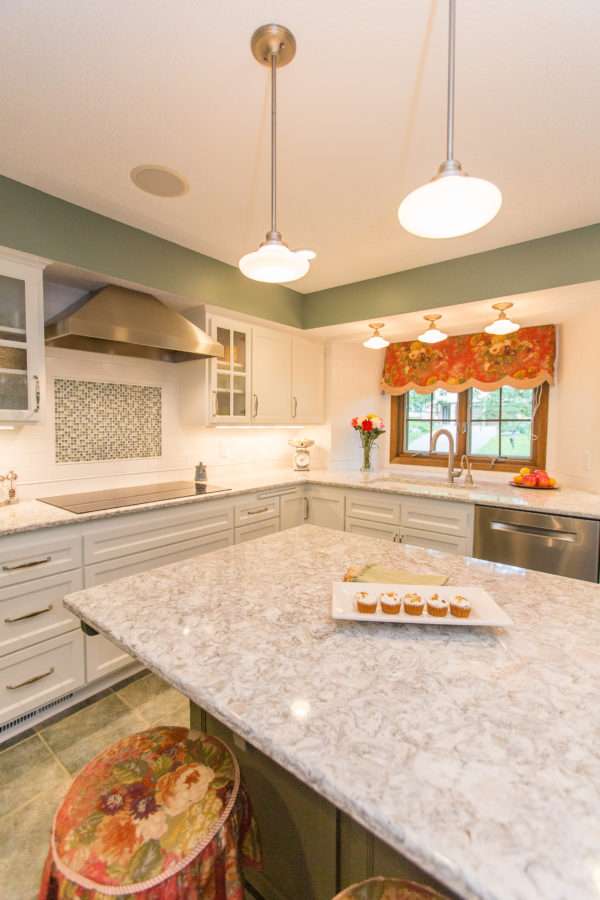 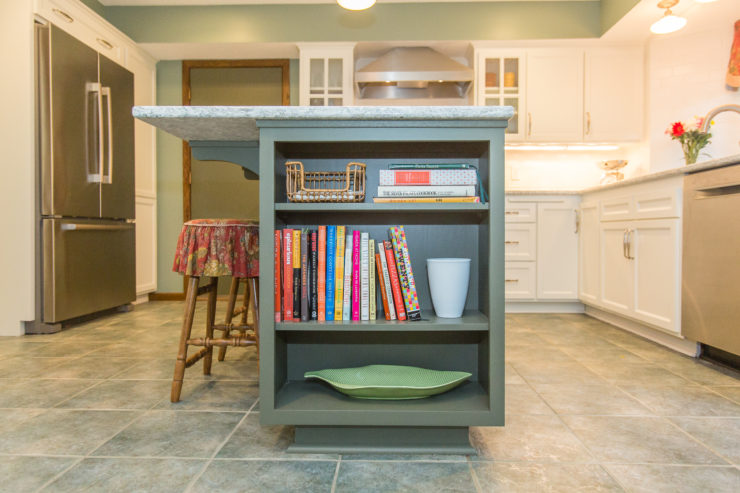 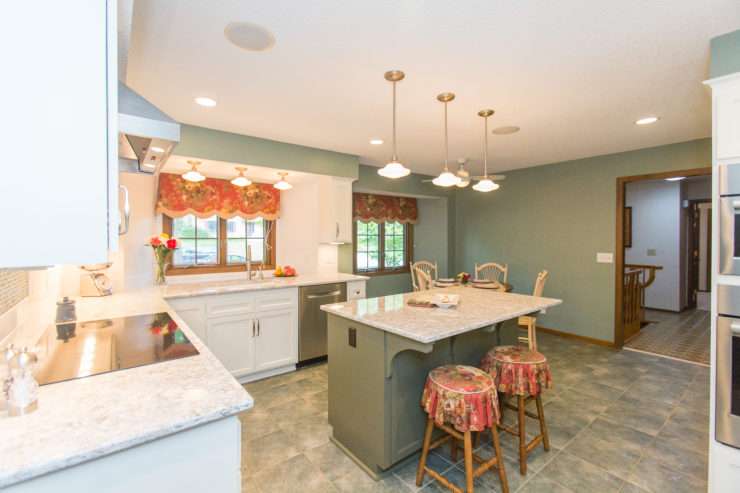 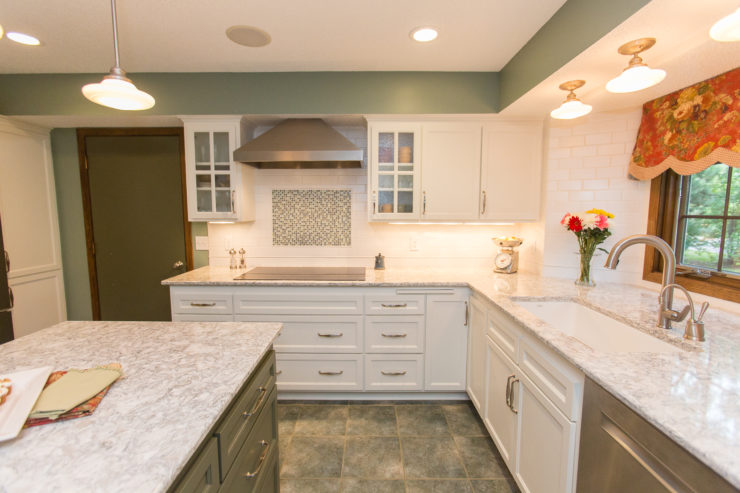 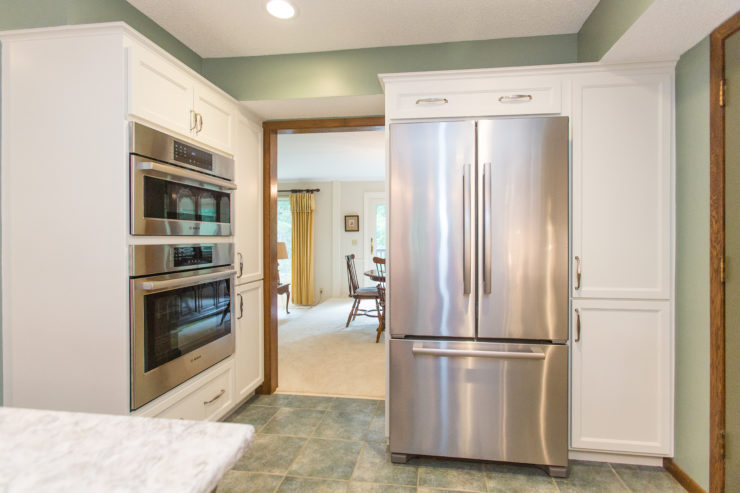 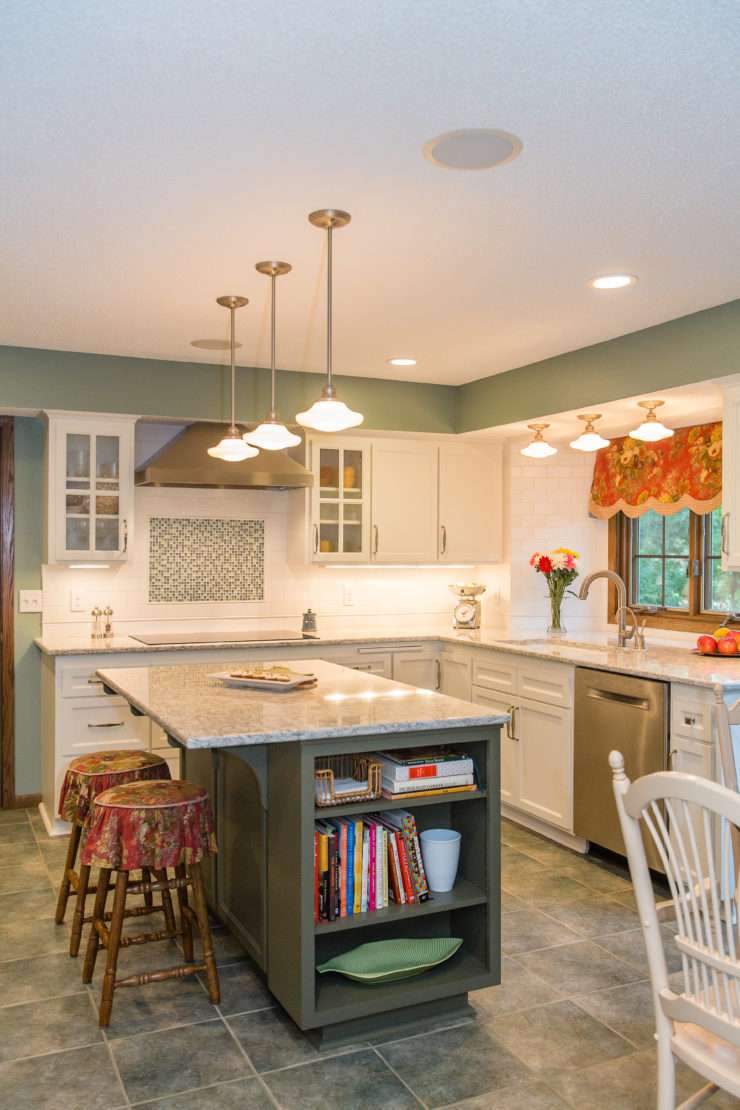 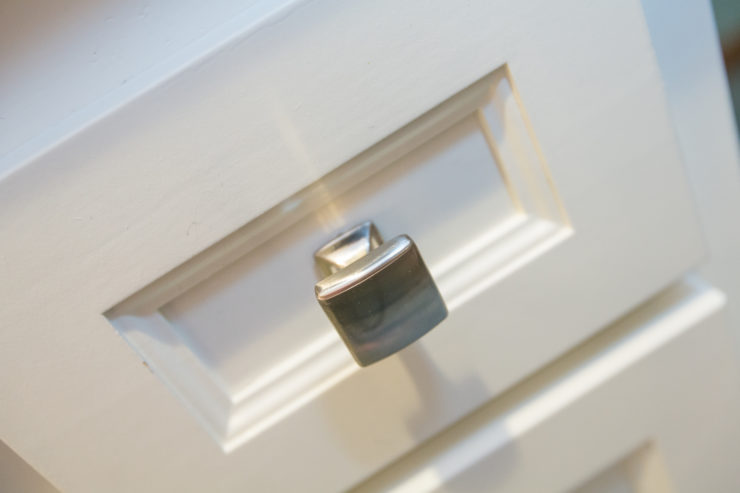 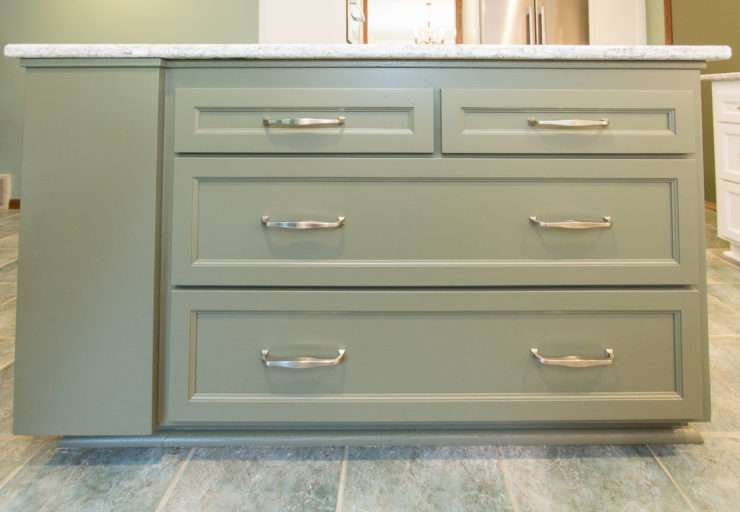 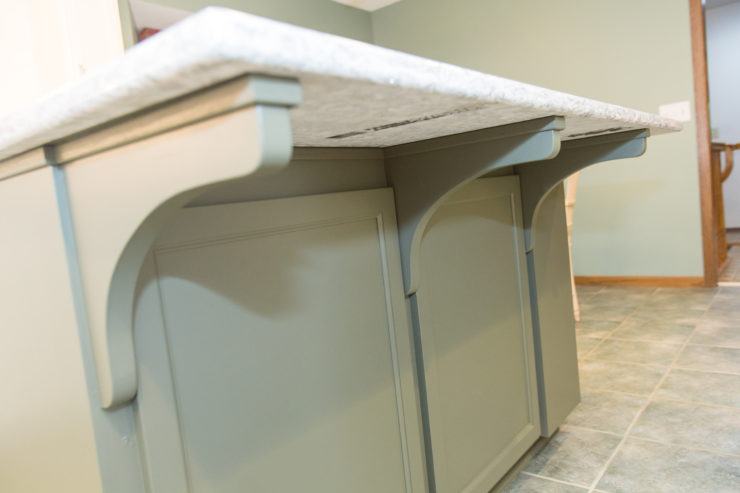 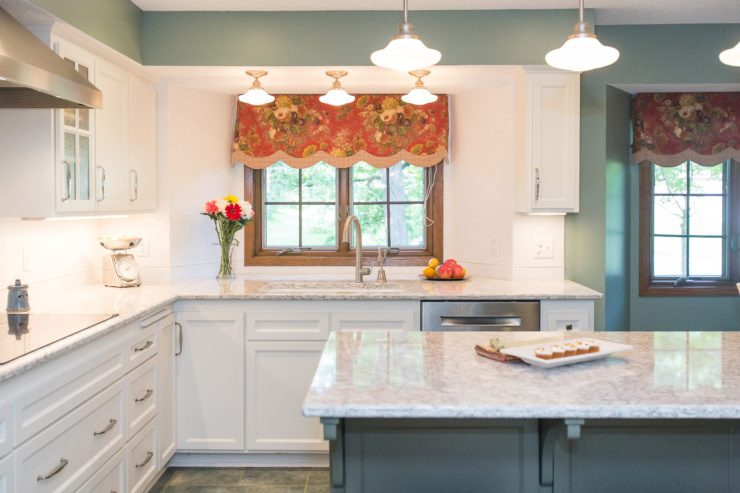 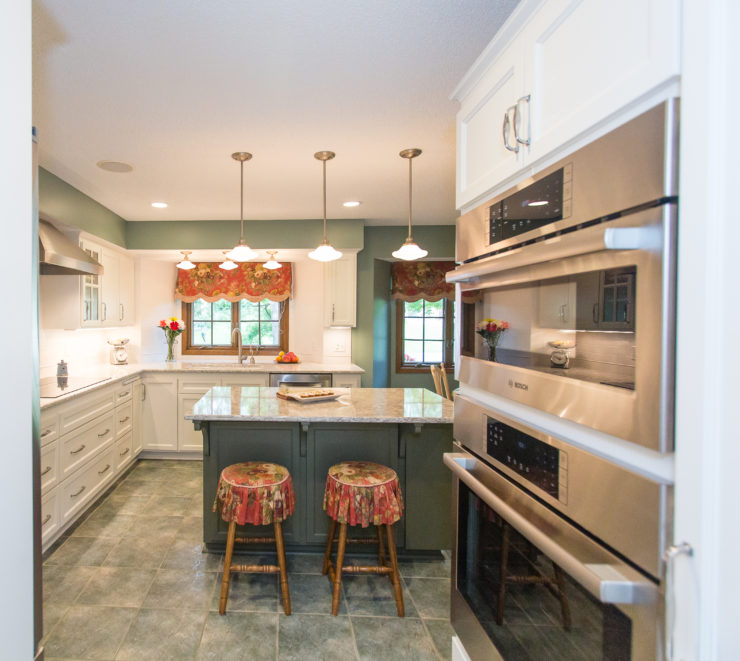 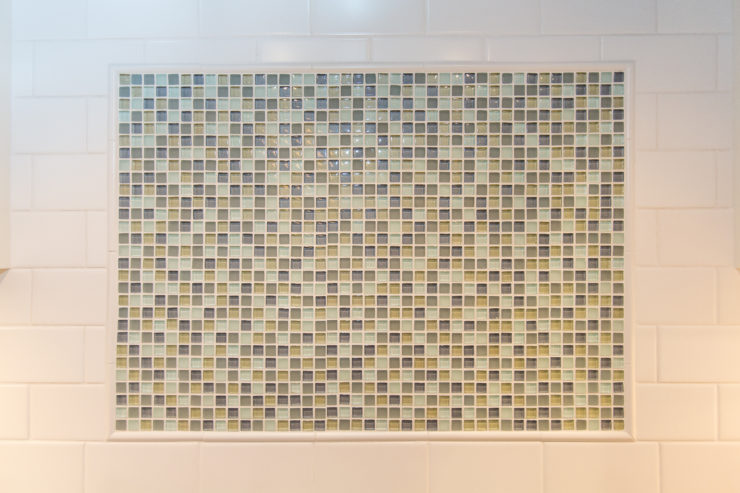 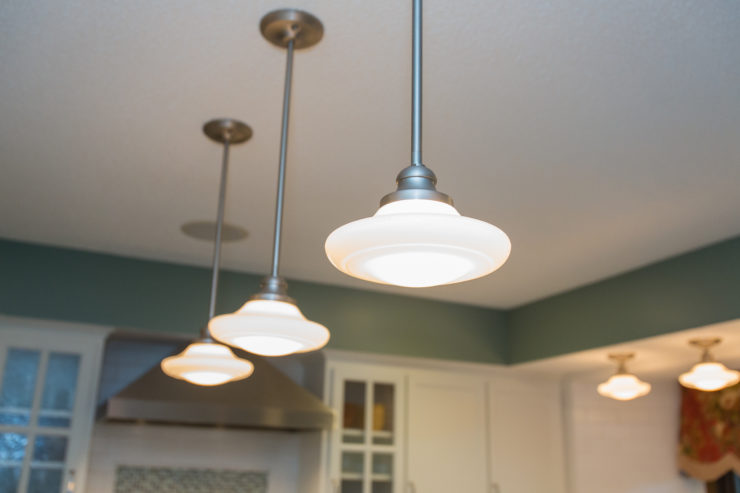 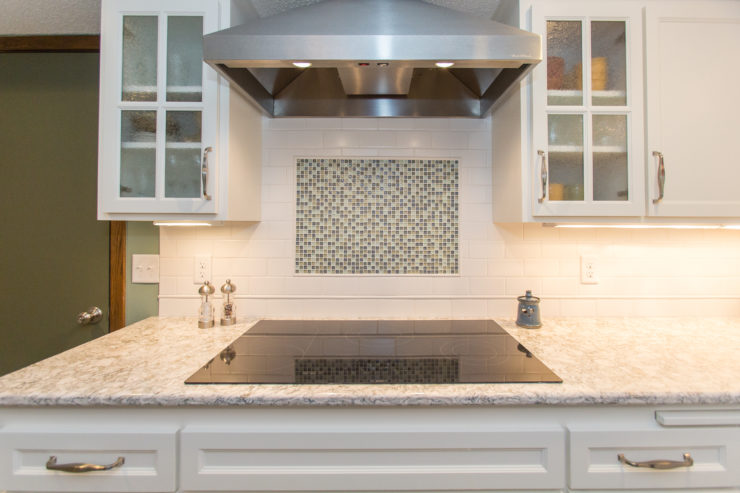 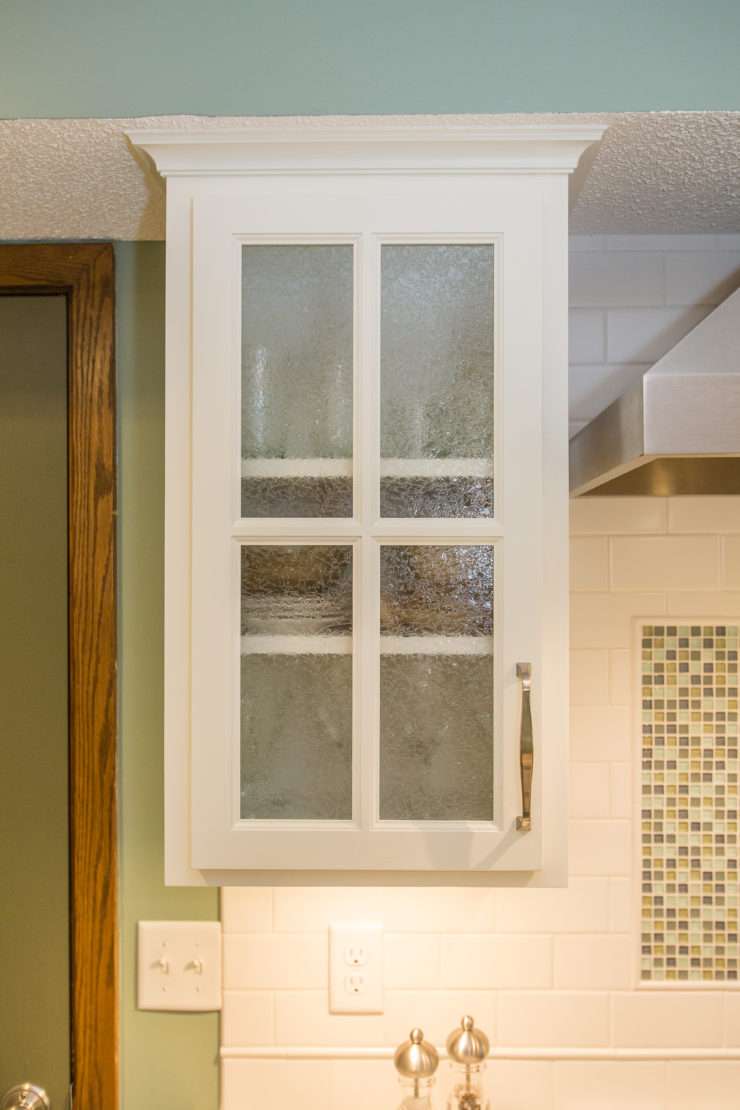 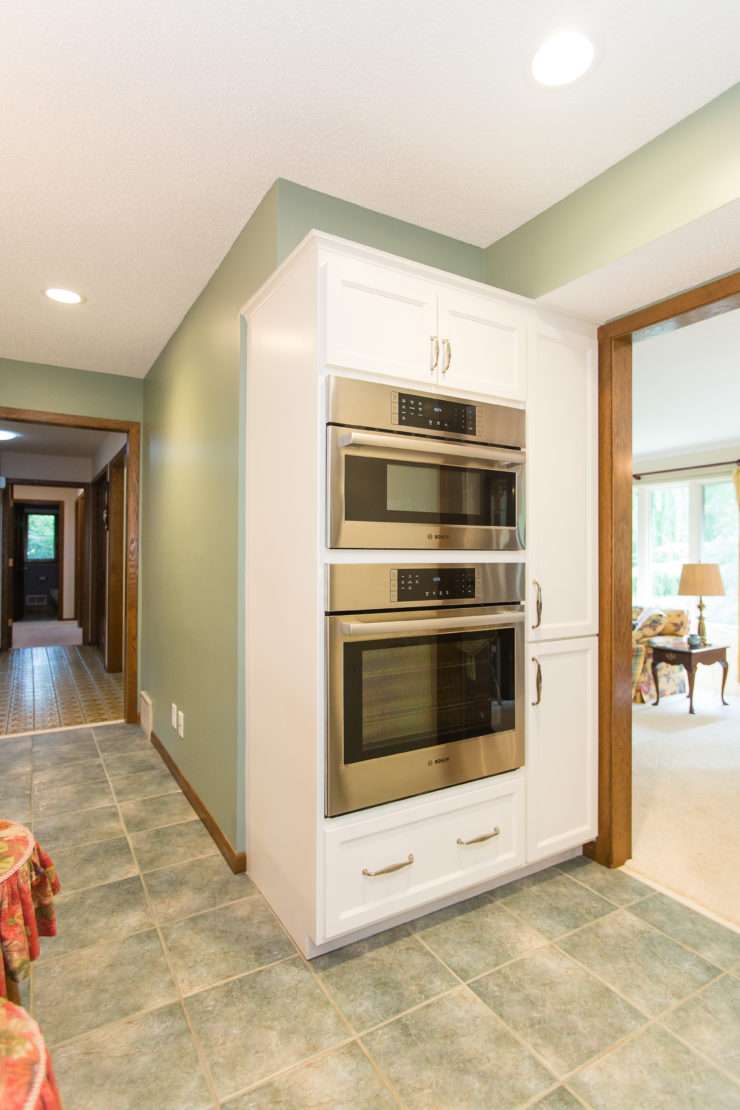 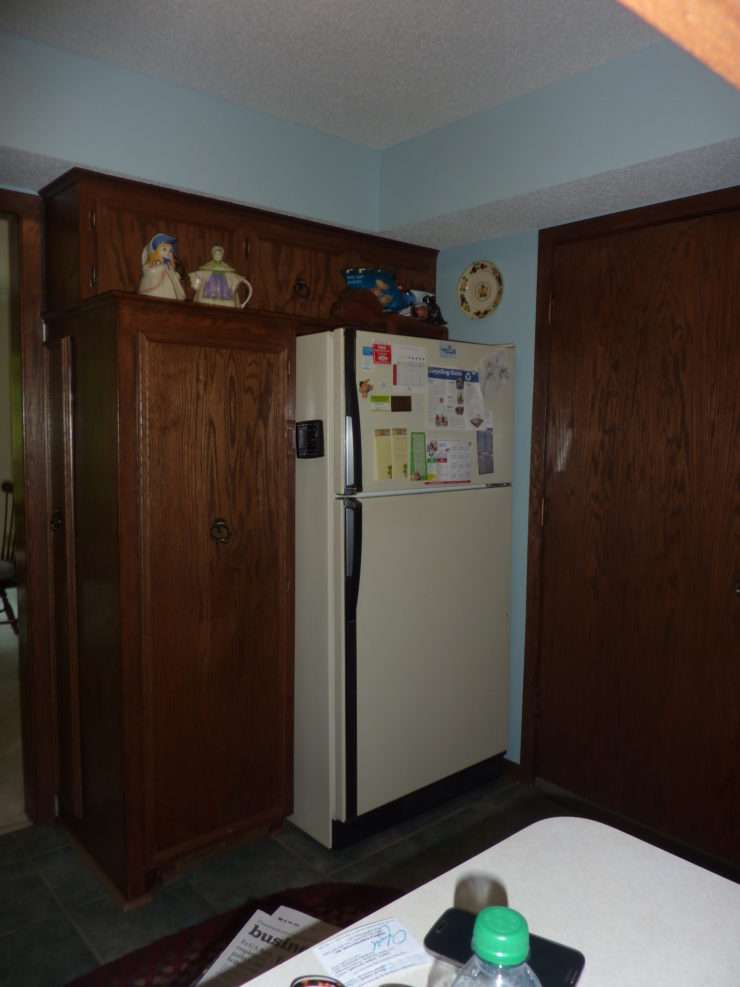 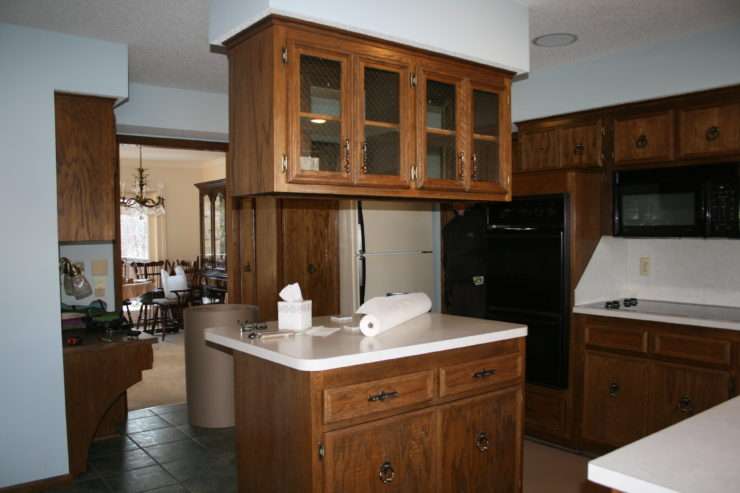 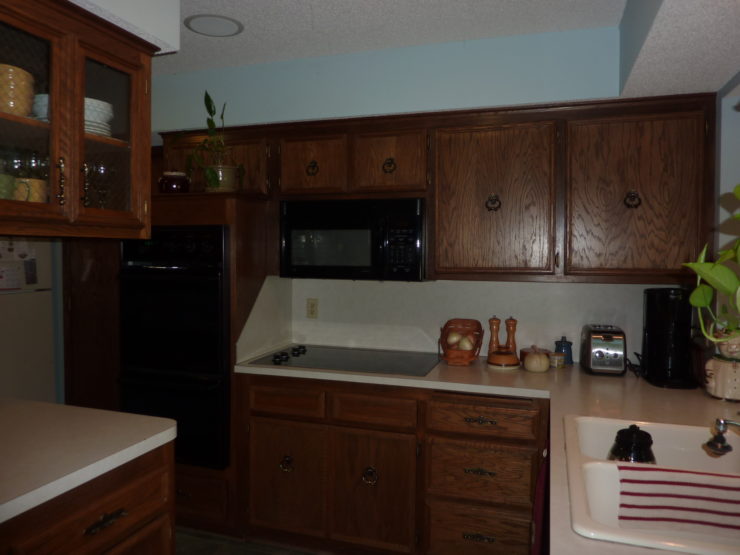 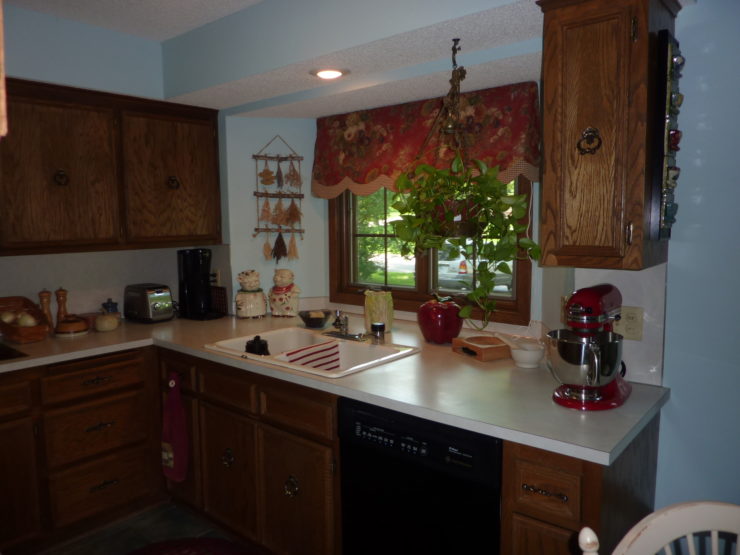 This huge single-level 1970’s rambler was almost perfect. The kitchen project was initiated by the death of their double oven & the realization that their cabinetry that would not accommodate modern appliance sizes. It was also dark & dysfunctional. Despite the owners list of limitations on items we could not touch, & personal effects they wanted to remain, we were able to come up with creative solutions! Installing & relocating appliances, reconstructing & painting custom cabinetry, enlarging the island, new countertops, lighting & tile splashes, transform this kitchen & breakfast area into a bright, functional space ready for family gatherings.

See other projects we did on this home :

This huge single-level 1970’s rambler with attached garage & walkout basement has been perfectly maintained by its owners. It has a wonderful open layout, large bedrooms, plenty of informal & formal space & rests on a large lot in a quite family neighborhood. The problem was the very outdated general bath, master suite & kitchen.

The kitchen project was initiated by the death of their double oven & discovery that most modern appliances could not fit in the cabinet spaces cut for their original ones. Not only was the stained woodwork, brass center handles & upper cabinet over the island extremely dated & dark, but there were functional issues as well. The refrigerator was behind the attached garage entry door, & the double ovens were directly across from it, so if more than one person came through this heavy traffic area, you either got smooshed by the refrigerator or burnt by the open wall oven.

It was important for our clients to not only keep the space personalized with their custom touches, but also make sure that they increased resale value, efficiency & storage.

The list of things we could NOT touch: The ceramic 12×12-tile flooring, the hand-made motorized flower window treatments, the dark stained oak original window & door millwork, or any existing openings from the kitchen to the front entry, garage & formal dining room. We also had to make sure that their informal kitchen table & chairs & island stools fit within the proposed design. Beyond those limitations, we were free to come up with creative solutions.

The soffit & upper cabinet over the center island were removed & Keller pendant lighting was installed in its place. The center island was completely open & accessible with doors from both the seated side & on the front cooking side. To create easily accessible space & replace the sagging center shelf, the back of the island was closed off & decorative panels were installed there & on the ends. The front of the island changed to soft close drawers & the island itself was lengthened by adding a custom bookcase on the end & widened using support brackets for a deeper overhang. The new island is now the appropriate size for this large kitchen.

The old pantry & sit down desk area between the formal dining room & kitchen were eliminated & cabinets were built to hold the microwave/convection & wall ovens as well as pantry storage in this different location. By switching the refrigerator & custom cabinetry locations, rarely used items could be stored behind the garage door & the refrigerator was fully accessible.

The old cooktop & microwave/hood over-the-range were replaced with a new cooktop & a single wall-mounted SS hood. Some of the base cabinets on this wall were rebuilt & the uppers were taken down & replaced with divided-light obscure-glass doors.

The base cabinetry & the uppers at the sink/DW area were reconstructed to accommodate custom storage solutions. The massively deep countertop at the bay window bump out that existed at the sink became useful & attractive with matching Keller semi-flush symmetrically spaced lights.

All cabinetry functions without interruption using concealed soft-close hinges, door & drawer rollouts. The style of simple full-overlay framed doors show off the sleek knobs & pulls from the aptly named Transcend collection. It took quite a bit of convincing, but we finally got them to paint the beloved cabinetry! With the perimeter painted a soft white & the island a contrasting grey/green, the floor tile color is not only neutralized, but a vein in the Cambria Quartz Stone Berwyn countertops is enhanced.

The subway tile pattern used as the backsplash around the perimeter of the kitchen goes from the top of the countertops to the bottom of the upper cabinetry with a pencil rail adding interest along the way & picture frames the colorful glass mosaic at the cooktop, which in turn touches on the island & existing floor tile colors.

With the addition of recessed & under-cabinet lighting, plus the transformation to light finishes throughout the kitchen, the owners now have a bright space, ready for family gatherings.